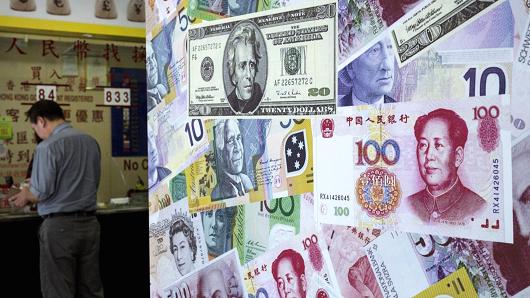 The yuan has certainly been volatile recently.

The People’s Bank of China (PBOC) set the yuan midpoint at 6.9262 on Monday, a sharp drop for the renminbi, compared with Friday’s fixing at 6.8668. On Tuesday, the fixing was set at 6.9234, indicating a slightly stronger yuan, compared with the pair’s onshore trading close at 6.9330 on Monday.

China’s central bank does not allow the currency to move more than 2 percent from its daily fixing in onshore trade. While policymakers cannot closely control offshore trade of the currency, it usually remains relatively close to its onshore counterpart.

«We’ve started the year with some fireworks in the currency,» Robertsen said. But while he expected dollar strength would continue to pressure the yuan, he only expected the dollar/yuan pair would rise to around 7.06 this year.

He noted that the PBOC was likely to use three methods to control the pace of the renminbi’s depreciation – foreign-exchange intervention, interest rates and capital controls – but added that those would all present «very challenging side-effects.»

Intervention was the most straightforward way to control the currency, but the bite out of foreign-exchange reserves could become an issue, Robertsen said.

On Saturday, China reported that its foreign exchange reserves fell for a sixth straight month in December, declining by $41 billion for the month, to $3.011 trillion, the lowest since early 2011.

«We’ve seen a meaningful decline in reserves over the last two years, largely as a function of FX intervention,» he said. «If they continue to intervene in the FX markets, they will categorically take the FX reserve number through $3 trillion.»

In pragmatic terms, China’s reserves would still be adequate as it likely doesn’t need more than $2.25 trillion, he noted.

«But the market doesn’t see it that way. A break of $3 trillion will lead to a picked up pace of capital outflows and the PBOC has to manage that situation,» he said.

The second way policy makers can support the currency would be through interest rates, but that can only be a short-term measure, Robertsen said.

«The onshore investor community is heavily long fixed income and the interbank community has deployed quite a bit of leverage in expanding their balance sheets,» he said. «For them to either tighten monetary policy explicitly or tighten onshore liquidity conditions through either onshore or offshore liquidity measures in the interest rate and foreign exchange markets will have a significant impact on investor liquidity onshore.»

Robertsen said policymakers had leaned aggressively on the third strategy, capital controls, over the past three months.

Chinese regulators introduced new rules, which will take effect in July, requiring financial institutions on the mainland to report domestic and overseas cash transactions of more than 50,000 yuan (around $7,217), down from 200,000 yuan previously, Reuters reported.

«Getting capital out of the country has frankly become much more difficult,» Robertsen said, noting that the measures come as the annual quota on currency conversion of $50,000 for individuals has «reset» for the new year.

«They’re working very hard to make sure that is done in a way that is according to the rules and regulations,» he said.

But he noted that the capital controls and the step up in enforcement work counter to policymakers’ longer term goals.