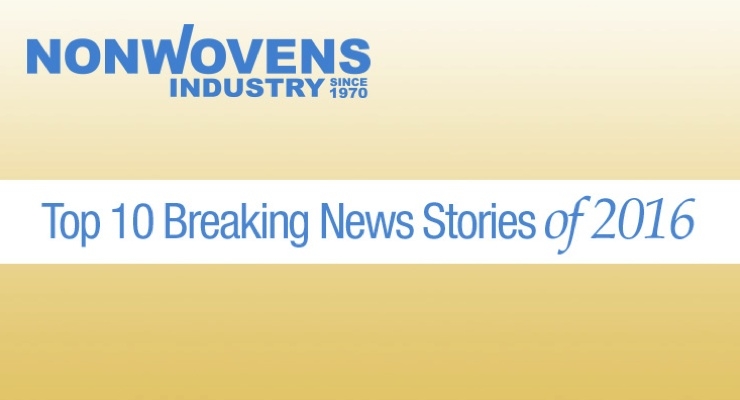 As we head into the New Year, Nonwovens Industry is taking a look back at the most popular breaking news stories of 2016. Coverage on mergers, investments and new products were among the most clicked-on news items at www.nonwovens-industry.com. Here’s a look at what trended in the industry, according to our readers:

1. Ahlstrom, Munksjö Announce Merger In November, Finnish nonwovens producer Ahlstrom and specialty paper company Munksjö announced a plan combine their two companies. Together, the companies have already jointly operated a site in Turin, Italy, since 2013 when Munksjö AB and Ahlstrom’s Label and Processing business merged. The new company will be a global leader in sustainable and innovative fiber-based solutions and will operate 41 production and converting facilities in 14 countries.

3. SCA to Exit Mexican Diaper Market In October, SCA has announced it would exit the baby diaper market in Mexico as part of its effort to address markets with less than adequate profitability. The company said it would continue to focus on its market leading feminine hygiene, adult incontinence and tissue businesses in the country. Total costs of the closure were estimated at SEK 170 million ($20 million). In December, the company announced it would discontinue its hygiene business in India, which mostly produced baby diapers, after it determined that profitability could not be achieved there within a reasonable timeframe.

5. Mogul to Build New Plant in Turkey A year ago, Turkish nonwovens producer Mogul announced plans to expand its production in Turkey with a third plant in Luleburgaz, outside of Istanbul. Mogul already operates two plants in Gaziantep, Turkey. Mogul’s third Turkish plant utilizes cutting edge technology to add performance-based fabrics to its existing nonwoven offerings to better serve demand for specialized and differentiated end uses such as technical applications. The high-grade production lines include processes such as splittable bi-component filaments as well as cross-lap spunlace.

9. Rockline and SCA Personal Care Recall Tena Wipes in Canada Last year, Rockline Industries and SCA Personal Care recalled Tena Ultra Washcloths, Tena Ultra Flush Washcloths, Tena Ultra Adult Wipes distributed by SCA Personal Care to distributors and retailers across Canada. The wipes, which were produced in 2015, were recalled as a result of complaints of an ammonia-like odor. After conducting microbial testing, the company found the presence of the bacteria Burkholderia cepacia (B. cepacia) in certain lots of wipe products. This bacterium poses little medical risk to healthy people, however, people who have certain health problems like a weakened immune system or chronic lung disease, particularly cystic fibrosis, may be more susceptible to infections with B. cepacia.

10. Bondex Makes Spunlace Investment Over the summer, Bondex, Inc., invested $20 million in an expansion to add hydroentangled spunlace products to their existing portfolio. Supplied by Trützschler, the spunlace process technology includes a 400 bar high pressure hydroentangling unit fed by a fiber processing line. The investment also included a wide range of finishing equipment such as singeing, calendering, laminating, chemical impregnation, heat setting and slitting. Bondex, which is part of Andrew Industries, is providing the material to the filtration market and other specialty applications.